With a movie based on his life now in theaters, it seemed like the right time to honor one of the greatest rappers ever to grip a microphone, The Notorious B.I.G. And since Biggie himself was a fan of top ten lists (check out “Ten Crack Commandments”), this is the perfect place to honor him. So I’ve decided to take the theme of one of his greatest songs and translate it to Chicago sports. Here are ten guys who started being a problem on the field or court after they got big contracts from their teams. 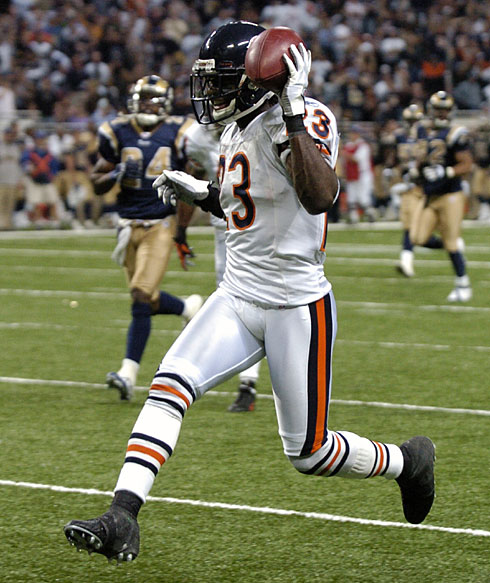 In his first two seasons, Hester was the greatest kick/punt returner in NFL history. Yet the Bears weren’t satisfied with his 11 regular season and one Super Bowl returns for touchdowns. They wanted him to be a #1 receiver as well, and in exchange, Hester started singing a different classic Biggie song: ‘Gimmie the Loot’. #23 threatened to hold out of 2008’s training camp, but eventually, the Bears agreed to a four-year, $40 million (with incentives) contract. After getting his cash, Hester responded with his worst season to date, not coming close to returning a kick for a score and putting up receiving numbers (51 catches, 665 yards, three TD’s) worthy of a number three wideout, not a number one.

During the 1997 season, while playing shortstop for the Braves, Blauser hit .308, drove in 70 runs and made the NL All-Star team. He was the top hitter for a team that won 101 games and was one of the most sought-after free agents in the winter of ’97. The Cubs, in constant need of a quality middle-infielder, scooped up Blauser for a two-year, $7.5 million contract, with a $4 mil. team option for third year. The teams reason for giving the 32 year-old Blauser the big deal? He it well over .300 in his career at Wrigley Field. Of course when signed by the North Siders, he no longer got to face Cubs pitching, and after the two years where Blauser hit around .230, the team let him go. After his dominant 2007 playoff series against the Miami Heat, there wasn’t a more popular guy in the Windy City than Deng. Fans begged GM John Paxson not to include the forward in proposed trades for Kevin Garnett or Kobe Bryant (Neither of which was actually close to taking place) and instead to sign him to a long-term deal. In the summer of ’08, the Bulls finally agreed to o a six-year, $70 million contract with Deng. Of course since that signing, he’s averaging 14 points and six rebounds a game, both career lows since his rookie year. Now fans are begging Paxson to get rid of Deng any way he can.

It’s hard to call Urlacher a ‘problem’, considering he has been the best player on the Bears for 95% of the time since he was drafted. Yet the truth is, before he signed his latest contract, the Bears middle linebacker always was near the team lead in tackles, was great at forcing turnovers and clearly the guy opposing offenses game-planned to stop. Then, as B.I.G. said, Things Done Changed. Urlacher was given a new extension in 2008 that pays him about $6.5 million yearly until 2012 and responded with a career low in tackles, sacks and fumbles forced (excluding 2004 when Urlacher was hurt). Some fans say the Bears should move Lance Briggs to MLB, others say just cut Urlacher. It will be interesting to see what GM Jerry Angelo does with the face of the franchise.

According to the trusty folks at baseball-reference.com, the White Sox paid Vazquez a total of $36 million in the three years he pitched for the team. For all that money, the Sox got 38 wins, 36 losses and an ERA over four. Considering he was brought to the South Side in the winter following the World Series to make the rotation the best in baseball, it definitely cannot be considered money well spent. I doubt anybody disagrees that the Sox made the smart decision this winter to trade Vazquez to the Braves for a quartet of minor league prospects.

If there’s one thing the NBA has a lot of, it’s perimeter players that can jump out of the gym but don’t understand the real fundamentals of basketball. Eddie Robinson was one of those guys. So in the summer of 2001, when Bulls GM Jerry Krause signed E-Rob to a five year, $32 million contract, it was seen with puzzled looks around the city. Turns out the critics were right. After two seasons of injuries, laziness and DNP-CD’s, the Bulls bought Robinson out of his deal, paying him $10.5 million to just go away. This past November, Robinson was taken in the fifth round of the D-League draft, but ended up not making the roster of the Albuquerque Thunderbirds.

The title of Biggie’s first album could easily share the name of a story recapping Muhammad’s time with the Bears: Ready to Die. After putting together multiple good years with Carolina, the Bears signed Muhammad in February of 2005 to be the big play wide receiver they have always lacked. The deal- six years, $30 million- was by far the biggest contract the team had ever given to a wideout. Turns out the moment Moose put on the blue and orange uniform, his skills went away. In three years with the Bears, Muhammad never had a season where he had more than 65 catches, 870 yards or five touchdowns. The team cut him last February, and after re-signing with the Panthers, Muhammad put together a season where he matched or exceeded all three of those statistical benchmarks. After being a key member of the White Sox championship team in 2005, Konerko entered free agency that winter as one of the most sought-after players on the market. He got offers from a bunch of teams, but ended up going back to the South Side, agreeing to a deal worth five years and $60 million. The Sox thought they were getting an All-Star caliber player; instead they ended up with a player who has struggled at the plate the last two seasons. There are now almost daily trade rumors about Konerko, many involving a deal to Anaheim, a team he was close to signing with in the winter of ’05.

Three years and $11 million doesn’t seem like that outrageous of a contract, especially compared to other players on this list. But the reason Hawkins is number two on this list is because his year and a half with the Cubs still give the Wrigley faithful nightmares. Signed in the winter of 2003 from the Twins, Hawkins was supposed to shore up the Cubs bullpen. Instead, thanks to his 6-8 record with 13 blown saves during his time in Cubby blue, he pretty much single-handedly kept the Cubs out of the 2004 playoffs. The team traded him in May of 2005 to the Giants and Hawkins is currently on Houston, which means he will face the Cubs 18 time a year, something Cubs fans couldn’t be happier about.

There’s no doubt that the man known as Big Poppa- real name Chris Wallace- would have been disappointed in the one called Big Ben- real name Ben Wallace. The former Piston was a key member of Detroit’s rise to dominance in the Eastern Conference, winning NBA Defensive Player of the Year four times and leading the Pistons to the ’04 NBA Title. In the summer of 2006, the Bulls signed Ben to a 4-year, $60 million contract, an astounding deal for the then-32 year old big man who didn’t even fill the team’s biggest need, low post scoring. After a year and a half in a Bulls uniform, where Wallace averaged about five points and 10 rebounds a game, the team dealt him in a three-team trade to division rival Cleveland.
Posted by Ricky O'Donnell at 12:14 AM

NICE! I am sure Luol Deng looks to E-Rob as a role model.