I wanted to do a top ten list on the best Chicago games of 2008, but then I realized there would be no Bulls games on it, only one or two Bears games, and the rest all Cubs and Sox. So, I decided to go with only five, and then have the other five be the best games overall of 2008. Sorry this is kind of a random list, but it was late, and I was really out of ideas.

5. Texas at Texas Tech (Nov. 1) After Colt McCoy took his team down the field for the go-ahead score, Texas Tech came right back and won with one second left on a 28-yard touchdown pass to Michael Crabtree (shouldn’t Jerry Angelo consider trading up to get this guy)? This game prevented Texas from playing for the national championship, and probably cost McCoy the Heisman trophy, even though he led his team back from a 16-point second half deficit. Tech quarterback Graham Harrell wasn’t too bad himself, throwing for almost 500 yards. In their previous international tournaments, the U.S. men’s team had embarrassed their predecessors by failing to win gold. The “Redeem Team”, led by Kobe, LeBron, and Wade, cruised to the gold medal game, where they managed to hold off a tough Spain team. Wade, by far the team’s MVP in Beijing, finished with 27 points. Despite routing Spain earlier in the tournament and shooting 60% for the game, the U.S. never could pull away at any point. 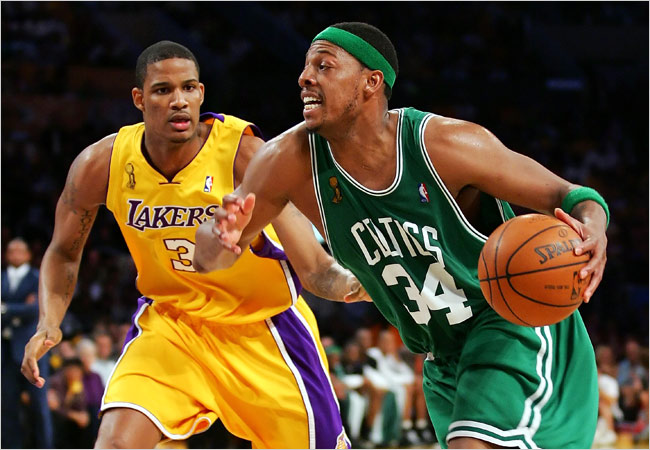 Midway through the third quarter, Boston trailed the Lakers by 20 points, and the series seemed destined to be tied at two games apiece. Led by the “Big Three” along with contributions from subs James Posey, Leon Powe and Eddie House, the Celtics stormed back to stun the Lakers and put themselves in the drivers seat for the franchise’s 17th championship. It was the largest comeback in the finals since 1971.

Derrick Rose was brilliant, but thanks to a questionable coaching decision by John Calipari, shaky Memphis free show shooting, and an unbelievable shot by Mario Chalmers, Kansas overcame a nine-point deficit in the final two minutes and ended up winning in overtime. These two teams were so evenly matched, I got the feeling if they played 20 times, they would end up splitting the games. With apologies to the Jets beating the Colts and Broncos beating the Packers, this was without a doubt the biggest upset in Super Bowl history, maybe even in sports history. David Tyree’s circus grab on the Giants final drive will be replayed over and over, but the real reason the Giants pulled the shocker was the play of their defense, holding a record-setting Patriots offense to a mere 14 points. Nothing gave me greater satisfaction than seeing the Patriots 16-0 regular season go for naught, and seeing Bill Belichick walk off the field in disgust.

Before the season, did anyone honestly think we’d see the Bears score 48 points in one game? Granted, 14 of those points came on fluke special teams miscues by Minnesota, and the defense did allow Gus Frerotte to look like Tom Brady, but still, what an awesome game to watch this was.

4. Brewers vs. Cubs (Sept. 18) With the Cubs down to their final out and behind 6-2, three consecutive Cubs reached before Geovany Soto tied the game with a three-run homer. The Cubs, who would go on to clinch the division a few days later, won it in the 12th on a single from Derrek Lee.

Trailing 9-1 going into the bottom of the sixth, the Cubs' bats suddenly came to life. Homers by Jim Edmonds, Henry Blanco and Kosuke Fukudome brought the Cubs closer, and a two-run go-ahead shot by Mark DeRosa in the seventh capped a six-run inning and ignited what was still left of the Wrigley crowd.

2. Astros vs. Cubs (Sept. 14) After missing his previous two starts with a sore rotator cuff, Carlos Zambrano threw the Cubs’ first no-hitter in 36 years in front of a pro-Cubs crowd at Miller Park. Zambrano was dominant, coming just one walk short of a perfect game.

1. Twins vs. White Sox one-game playoff (Sept. 30) John Danks pitched the game of his life in front of a “black-out” crowd, going eight scoreless innings on just three days rest. Jim Thome accounted for the game’s only run with a solo homer in the seventh, two innings after Ken Griffey Jr. kept the game scoreless by gunning down a Twins runner at the plate. Don’t forget about Brian Anderson’s diving catch to end the game either.
Posted by Ricky O'Donnell at 3:01 AM

"With the Cubs down to their final out and behind 6-2, three consecutive Cubs reached before Geovany Soto tied the game with a three-run homer. The Cubs, who would go on to clinch the division a few days later, won it in the 12th on a single from Derrek Lee.

If the score were 6-2, and three Cubs reached base before Geo hit his homer, wouldn't that have been a grand slam, not a three-run shot?

Annonymous, no you are absolutely wrong. Three Cubs reached base before Soto, which consisted of a Ramirez double, Edmonds single (which scored Ramirez) and then a DeRosa single. So Soto ended up coming up with two runners on and one run already in, therefore making his homer a three-run shot. Here's the link if you don't believe me. http://sports.espn.go.com/mlb/recap?gameId=280918116

even though you're right, this list was random, I thought it was solid and something different. My only question was, no MLB ALL-Star game on it? 15 innings, five hours, Brad Lidge taking his only loss of the season, Dan Uggla embarassing himself, Dempster looking filthy for an inning? I would have put that on there way before Texas/Texas Tech. I guess you like college football a lot more than baseball.

You're arguing on behalf of an All-Star game?

A game in which only the most bored insomniacs actually stayed up to watch? A game that ended with a sac fly producing the winning run?

Or an absolute shootout between Texas (who was #1 & undefeated at the time) and the vaulted Texas Tech offense with the number one WR in the draft making one of the most ridiculous last second touchdown grabs in recent memory?