Holy hell. This game was unreal. The Bears were outplayed by the Packers for most of the game, out gained 325 to 210 and still were able to pull through. This was the first game I took notes on every play and I am glad I did. Because this game was literally the end all be all for the Bears and went to overtime, I added an extra five notes/moments to today’s Top Ten list, making it TTCS first Top Fifteen list… kind of.

The Bears were once again vulnerable in the pass game. Aaron Rodgers threw for 260 yards and two TDs. It seems that Babich has not made the proper adjustments and any QB will pick apart the Bears secondary. On a positive note, Corey Graham didn’t suck. In fact, he broke up two deep passes.

I still do not get this move, especially after the mess it caused in the Falcons game. I know the wind was bad, but the only two times the Bears played it cute on the kickoff, it led to amazing field position for the Packers. One led to a touchdown when an up-man took the squib kick to the forty and the other should have led to the Packers game winning field goal…. Lovie definitely owes Alex Brown a Christmas bonus.

Recently the Bears have been criticized for blitzing without results. Tonight was different. Even thought the Bears did not sack Rodgers, they still provided pressure on him and the Pack’s running backs that led to incompletion and losses in the run game. I was happy to see the Bears D actually supply the heat necessary to defend their defensive strategy.

Just as the Bears can’t stop the pass, they continued to show they are solid against the run. The Pack only rushed for 65 yards, averaging 2.2-yards per carry. This also forced Green Bay into the Bears biggest weakness – their pass defense. I love that the Bears make teams one-dimensional on offense, but if they literally cannot stop that dimension, then what is the point?

So Brown is hurt again. Surprised? Me either. It is true that Brown is a step slower this year, but he still can lay out a receiver or tailback better than anyone in the NFL, just ask Ryan Grant. Unfortunately, Brown’s backup is Craig Steltz. Now, the former LSU safety may develop into a quality player, but right now he is over his head physically, as we found out when he was run over by Grant leading to Green Bay’s second TD. I hope for the Bears secondary that Brown will be fine for next week.

As usual the Bear line was overwhelmed. Some of this had to do with the Packers secondary giving the front four time to rush Orton, but a lot of it had to do with poor blocking by the line. Orton had no time in the pocket and it resulted in three sacks and some poor passes by the Bears QB. Furthermore, until the fourth quarter and in overtime the line could not give the Bears running backs any holes to run through. I think this upsets me the most when I watch the Bears. Just do your effing job.

4. Maynard is the man

In terrible conditions, Maynard was awesome. He put three kicks inside the 20 (one was run into the end zone by a Bear’s player) and averaged over 45-yards a punt. His long was 65-yards. I think Maynard is one of the biggest reasons the Bears are usually in almost every game. He puts teams in bad field position with his kicks and is considered one of the best directional kickers of all time. Brad = the man. 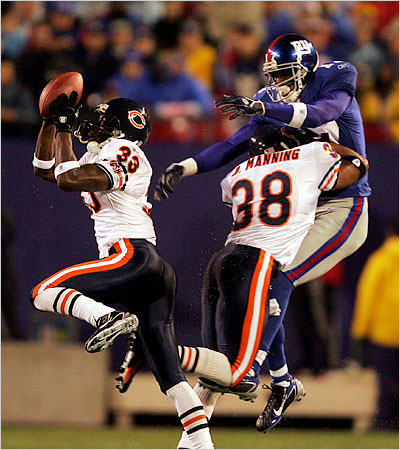 Pretty much the only reason the Bears won was because of D-Manning’s kick return and defensive play. His 70-yard kickoff return led to the first Bears touchdown and the pressure he got on Rodgers was almost the only heat the Packer QB felt. His tipped ball even led to Rodgers' only pick.

On the other hand, Hester was ok. In his final return and second longest return of the year (23-yards), Hester finally did not hesitate and look for a hole; instead he hit it hard and just let it happen. I hope he will take that into next week and hopefully break out BIG against the Texans.

2. No pressure without blitz

It was very, very sad to watch as Rodgers had all effing day to throw the ball when the Bears only rushed four. A few times Tommie Harris got into to the backfield, but not nearly enough. Even if the Bears do make the playoffs, they will go nowhere if they cannot get pressure on the QB when they drop into a traditional cover two and rush only four. This is the biggest reason they have struggled this year in the pass game and something needs to change. However, they did show some success with stunts late in the game. Maybe the Bears need to use untraditional moves like that or drop a DE and blitz a LB in order to change it up a bit and confuse the QB.

Brown is probably one of the most versatile DEs in the league. He is good in all aspects of the game and his huge handedness has now become his best trait as he saved the Bears season by blocking Mason Crosby’s 38-yard field goal attempt. PS he also had an interception and two tackles. I think Mark Anderson has officially given up.

Also, as I have promised here is the best comment making fun of me from my post last week by TTCS’s own Ricky O’Donnell:

The #1 moment of this party will be when Pete shows up. First, there will be a cordial greeting between he and Dubs, everything will be running smooth. But after a few Ginger Ale w/ cherry juice's, Dubs starts to get mouthy, as always, and begins to make fun of Pete for his incredibly lame AIM screen name (peaches054?).

After five minutes of sitting on his anger, Pete tells Dubs he will "straighten his head out", and Dubs, never one to back down from a fight against a guy approximately eleven times his size, agrees. The ensuing one sided slug fest leaves Dubs a bloody mess on the ground, and right before he passes we hear him say, "my....my...my...trust funnnndddddddddd."

I swear, Lovie must be the most stubborn S.O.B.

He was sitting on the sidelines saying to himself, "I'll show the fans of Chicago that the squib kick can be effective late in games. Now what are they going to say?"

Everyone can be as happy as they'd like, it was a big win.

But it was an early, gift wrapped, Kwanzaa, Hanukkah, Christmas and Festivus present from the Packers.

If we don't block that field goal, what are we talking about today?

Hotlanta all over again.