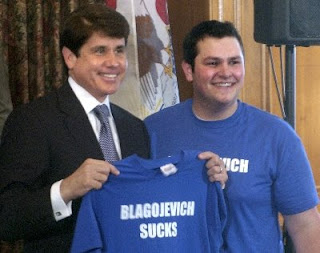 Yesterday, our proud Governor Rod Blagojevich (pictured above holding "Blagojevich Sucks" shirt) was arrested. Now I won't get into details as to what happened, I will let the Sun-Times explain it, but it is ANOTHER case of corrupt Illinois politics.

Now you may ask, "what does this have to do with sports?" Absolutely everything. There are many Chicago athletes currently stealing the fans hard-earned dollar by playing poorly and being more of a disgrace to us then we already need. Here are the top ten corrupt Chicago athletes who are stealing our money.

10. Brent Sopel (making $7 million over the next three years)

Sopel seduced the Blackhawks brass into giving him an extension with his solid play last season. Now that Sopel has earned his fair share of healthy scratches and played poorly he is being shopped around to any team that will take him. We also know that Sopel hasn't spent any of that $7 million on a reasonable looking haircut. 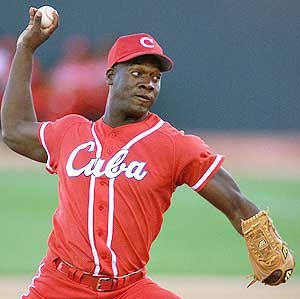 To be fair, Contreras was hurt. But $2 million dollars a start is not reasonable for any pitcher, especially one with a 4.54 ERA that may or may not be 47 years old. 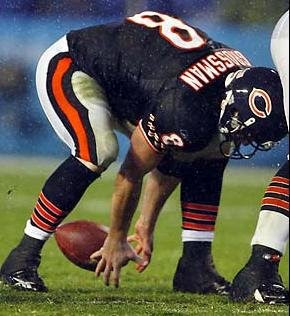 You know the franchise is not making money on Grossman in merchandising so this is a lot of money to just throw down the drain on the most hated player in Chicago. 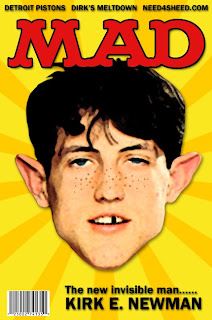 Hinrich was awful last year and is not even playing this season thanks to a bum thumb. He falls under my theory of things to play for. It's really a simple theory. If a player has gotten married (yes in Hinrich's case) and has financial stability (yes again in Hinrich's case) then he really has nothing to play for since he already has a woman and money. The only thing that can overcome those two powerful equalizers is pride and based on last season's showing we know Kirk has little of that. 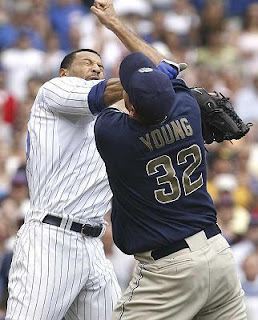 The Cubs could pay the TTCS crew half of this to strike out in our plate appearances instead of grounding into offense-killing double plays. For good show we would also go through prolonged power outages for weeks at a time and have sissy fights with 6-10 pitchers to make the top of the hour on Sportscenter. 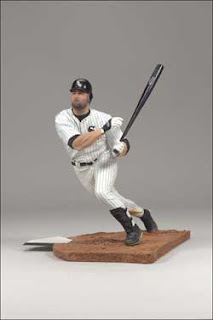 Paulie provides sentimental value for his inspired play in the 2005 title run, but at $12 mil a year he needs to do more throughout the season then show up the last couple weeks. Hopefully the old Konerko shows up for the 2009 season. It is also unclear who is faster; Paul Konerko or this action figure of Paul Konerko. 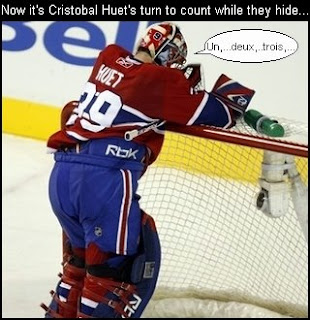 The Hawks made a big splash signing a 33-year old goalie who had one great season and watched him give up soft goals and put up the worst numbers of his career. Like all the guys on this list, Huet can salvage the contract by playing better but it doesn't look good so far. 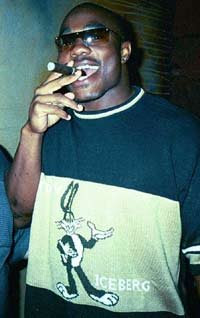 3. Cedric Benson, Adam Archuleta and Ricky (don't call me Danieal) Manning (being paid $7.8 million this season to NOT play in Chicago)

Remember the phrase gone but not forgotten? This applies here. While Benson's mugshot is all over the internet (and TTCS), Archuleta is so obscure now that if you google image search his name you will find more pictures of his wife and American Idol finalist David Archuleta than you will of the once proud football player. Ricky Manning on the other hand is probably still smoking cigars and assaulting people inside of Denny's. 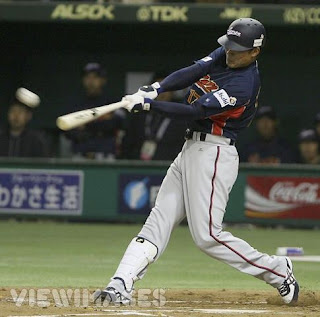 After reading that Cubs fans, and Lou Pinella, just collectively let out a wince. Fukudome has performed so poorly that Pinella has made it clear that he wants someone else to play in front of Fukudome next season. 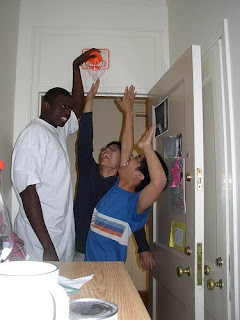 I could rant and rave about this but I will let Bill Simmons explain this through Gary Payton and Chris Webber.

"Speaking of robbery, I hope you caught the Greatest Show on TV on Tuesday night -- C-Webb, GP and Ahmad on NBA-TV -- when GP called out Luol Deng for robbing the Bulls with the $70 million extension, followed by C-Webb asking if Deng wore a mask during the robbery and GP answering that not only did Deng walk in there without a mask or a gun, he had his finger pushing into his coat pocket and pretended to hold a gun as he committed the robbery. Now THAT, my friends, is comedy gold."

While it may be comedy gold to the rest of the country the truth is Deng is averaging 14 and 5 and shooting 42% while making all that money. Good God...
Posted by Scott Phillips at 12:00 AM

That pic of Deng dunking over two smallish chinese exchange students is priceless. Where do you guys find these photos?

we work hard going all over the internet for goofy photos of Chicago athletes.