As the year ends many of us are trying to decide what our New Year resolutions will be. I did some research (take note Woody Paige) and found the worlds top ten New Year resolutions according to goalsguy.com. Each is a solid resolution and, most importantly, should also help some of our Chicago sports stars, GMs and coaches in 2009. Editors warning: there may be a lot of Bob Babich hate.

Jerry Angelo, you have a lot of work to do this off-season. You need to decide on your coaching staff (Bob Babich). You need to either draft or trade for a stud wide receiver. You need to sure up your offensive line and decide who on your roster is dispensable. Get your crap together. This off-season will decide the Bears future for the next five years. Figure it out.

9. Volunteer and Help Others


I think this is mandatory for Cedric Benson.

This applies to Bob Babich and Ron Turner. Babich believes in the cover two. Now that is fine in you have the talent and personnel. However, the Bears showed every week that they did not. Unfortunately, Babich did not change his play calls or try to make any sort of real personnel adjustment. Something needs to change.

There really never seemed to be any kind of “whoa, what was that”-type play all season with Turner as the play caller. It was all pretty straight forward. A lot of it has to do with the lack of a playmaker at the wide out position, but a lot has to do with Turner’s rather safe play calling. Open it up a little, find a wide out this off-season and become a decent offense.

Can this be directed at anyone other than Joakim Noah? Didn’t think so. Hey, Joakim, stop getting high. After years of personal research I have determined that getting high leads to two things; binge eating and staring at things. Unless Noah has some magical reaction to weed that makes him do things like workout and practice low post moves then, Joakim, by all means keep ripping that bong. But if it has the same affect as it does to anyone I know, then lay off the pipe and start actually working towards being a relatively decent NBA center. I mean Aaron Gray is outplaying you. AARON GRAY!?!?!?!?

Kyle Orton has shown he is a decent quarterback considering the tools he has around him. The Bears offense might seriously be a high quality receiver away from being better than average. The Bears front office needs to find Orton’s receiving soul mate this off-season. I mean Forte cannot be their leading receiver again, ever. That’s just sad.

This one is for Bob Babich. He needs to go and the Bears need to allow him to follow this resolution. Let him go, let him enjoy his family more. He wants it. He just won’t say it. Do it for him. He needs your help. Seriously, fire the crap out of him.

I think this resolution should be designated for the Tribune Co. Good luck with the bankruptcy and stuff.

2. Stick to a Budget

Now bear with me. I am a fan first, thus I think all teams should just spend whatever it takes to win. However, now that we have come into hard times I feel teams need to spend less and watch their budgets to at least make some money. The Bears have followed this recipe for years, while the White Sox are now just heeding this advice as they have dumped about a third of their roster this off-season. Now these teams may not make the playoffs next year, but at least they will make some money. And we all know that is what sports is all about.

1. Lose Weight and Get in Better Physical Shape

This firmly applies to Bobby Jenks. Jenks has gotten bigger each year here in Chicago and inversely his fastball has lost some pop. Plus, he has been more prone to injury. He claims he is just trying to “pitch” instead of “throw” and believes he can get it up to 100 MPH whenever he wants. I, however, call BS. Lose some weight you fat tub. That goes for you as well Charlie Weis. 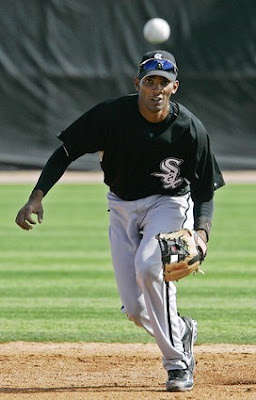 On the flip side, Alexei Ramirez needs to gain weight. He looks like a malnourished African you see on late night TV. Serious, Alexei, eat a sandwich.


What other resolutions should Chicago sports figures adopt in 2009?
Posted by Zach Martin at 12:01 AM

that's a picture of jerry owens, bud, not alexei.
and bobby jenks is choosing to pitch now, rather than throw 100. there's a dozen articles out there about him learning to get a batter out the smart and conservative way rather than blowing them away and becoming tired. check out his stats each year; although his strikeouts may be declining, his walks, hits allowed, homers allowed, and total runs allowed have decreased.

Thanks for the heads up on the picture.

My esteemed colleague Z Dubs is a Cubs fan and recognizing true talent always proves to be much too complicated for his brethren to handle. (Did I really just take this list to a Sox vs. Cubs level? Sure did)

I have since changed the photo, you'll now see the true Che Ramirez.

My bust on the pic. After trying to get a sweet pic of Alexei in Cuba (even skinnier) only to fail, I just grabbed the pic next to it and did not even look closely at it. Stupid google.

Anyway, yes Jenks seems to be pitching better, but everything did go up last year from 2007 in the negative (walks, hits) in fewer innings as well, because he was hurt (because he is fat). Furthermore, the good was also down (K's - big time, G's, IP). It just is never good for a pitcher to increase his WHIP, while decreasing his K's. More base runners and more balls in play, usually ends up hurting a pitcher in the long run. But then again it can be explained by a small sample size.

I don't know, I truly believe that he is closing in on eating himself out of baseball (becoming injury prone - back a la Wells, or arm a la Bartolo Colon, Brad Penn, a lot of fat pitchers). I really do see him having a down year. Maybe the Sox should try to trade him when his value is still high and not arb eligible. But again that is just my opinion. Thoughts?

PS Anonymous- i was referring to him still hitting 100 MPH whenever he wants when I said BS. I don't think he can, because of his weight. That is all I meant by that statement.

Vinny Del Negro - Stop looking so helpless on the sidelines.

Luke Schenscher - Hit the weight room, develop a drop step and get those minutes back that others took from you.

Mike Brown - Carry a gallon of milk without pulling a muscle.

Kirk Hinrich - Grow some balls, revert to old self.

Cubs lineup circa October of any year - See, "Hinrich, Kirk."

Ben Gordon - Sharing is caring, occasionally throw that orange ball towards the hands of another teammate in what we like to call "passing"

Jeff Samardzija - Sleep with as many women as possible because you should become Chicago's biggest partier with ease. How are you letting Pat Kane get all that 20 year old ass on his own? You're better than that.

Jay Mariotti - Make a friend; one is a good start.

Apparently my TTCS cohort and notorious Cubs fan has adopted the 'Wait until, next, next year' system for his sports hopes and dreams.

Olsen, thanx for explaining the douche's fault, but realize, there is still talk of 2010 in the opening.

They are fixed now.

Anonymous, when you try to rip on someone for making a mistake, I suggest you don't spell thanks like a 12-year-old girl. "Thankx," really?

Also, in that same "sentence," try to actually make it a legitimate sentence:

"Olsen, thanx for explaining the douche's fault, but realize, there is still talk of 2010 in the opening."

Seriously, if you are going to go after someone for a mistake, don't make two in the same sentence.

But thanks for stopping by!!!!

Strong post. I linked to it at Drive and Dish.

And I second the assertion that Scott Phillips' resolutions are sweet.