The Milwaukee Bucks just don’t know what to do when picking first overall in the NBA draft. In 1994 the Bucks selected Big Dog Robinson in front of Jason Kidd and Grant Hill, and then in 2005, went with Andrew Bogut over Chris Paul and Deron Williams.

Most teams though use common sense when selecting first. Here are the top ten #1 overall picks in the NBA right now (Sorry to Joe Smith, Andrea Bargnani and Mr. Bogut, you failed to make the cut). 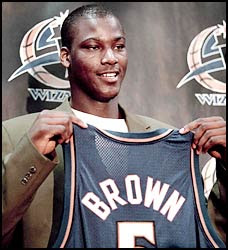 Despite missing his entire first year as a pro due to a knee injury, followed by sitting out two weeks after hurting his foot on opening night, the first pick of the ‘07 draft has been a nice player for the Blazers. He currently averages eight points, eight boards and about two blocks a game, which is pretty good for a guy who looks like the Grandpa from “The Cosby Show”.

The top pick in the worst draft ever, 2000, has had a pretty good career. After teaming with Jason Kidd to make back-to-back Finals appearances early in the decade with the Nets, K-Mart has since moved to the Nuggets where he has yet to leave the first round of the playoffs. Still, career averages of 14 points and seven rebounds a game isn’t too bad.

The former Bull, taken first in ’99, is one of four active players- and one of three on this list (only Kevin Garnett wasn’t eligible)- who have career averages of 20 or more points and 10 or more rebounds. So there is no doubt that he has been an elite player. But Brand is also the only one of the four who hasn’t won an NBA Title, part of the argument that many fans have that he’s a perfect #2 guy, but will never be the kind of player to lead a team all the way.

If this list was based on entire careers, than Mr. Kazaam would be at the top. His four NBA titles, 25 points, 11 rebounds and two blocks a game are the reason he will be inducted into the Hall-of-Fame five years after he retires. But right now, as the third option on a team barely above .500, the top pick in ‘92 can’t be higher than seven.

Our hometown hero has been everything fans have expected, plus more. Not only is he the team’s best scorer and passer already, but Rose has also made the Bulls must-see TV. Nobody wants to miss the next time the first pick in ‘08 makes a fool out of opposing defenders or when he has another dunk worthy of a SLAM poster. If this list is redone in two years, there’s no doubt Rose will be in the top three.

There isn’t a question if 2002’s top choice has the talent to be a great player in the league; the only doubt is if he can stay healthy. Yao’s career averages of 19 points, nine rebounds and two blocks per game are just a bit off the Duncan-Shaq-KG-Elton plateau. But since the start of the 2005 season, the big man has missed a total of 86 regular season games. When Yao ever gets over the injury bug, he’ll continue dominating the league.

No little guy has played as well, for as long, as The Answer. Since going #1 in ’96, Iverson has scored over 23,000 points, which places him 18th in league history. Pretty impressive for a guy who is lucky to be listed at six feet and is 170 pounds only after eating a deep-fried steak. Now with the Pistons, AI still is a player that demands attention whenever he has the ball, both by opponents and fans.

Four years later, the Dwight Howard or Emeka Okafor debate doesn’t seem so tough any more for the Magic. I guess that’s what 17 points, 12 rebounds and two blocks per game, plus one amazing performance in the dunk contest, will do. And the scary thing is, many people think that Howard doesn’t even appear to be trying all the time, and that if he really hustled his numbers could be even better.

His game is as flashy as a Toyota Camry and you almost never see him in commercials. But you’d have a tough time arguing that Duncan, the #1 pick in 1997, hasn’t been the best player in basketball in the 11 years since he was drafted. The Spurs star has won four championships, averaged 22 points, 12 rebounds and two blocks a game, and plays maybe the best post defense in the sport. All that, plus Duncan believes that he has never committed a foul.

What is there to say about the King that isn’t said in every 2010 free agency column? He’s one of the two best players in the world despite having several areas in his game that he could improve (outside shooting, post up moves). He’s the only player in the past 25 years with a realistic chance to average a triple-double in a regular season. And the top pick in ’03 has already made the NBA Finals despite without ever playing with another elite player. Oh yeah, and later this month, he’ll turn the grand old age of 24.

I got Dwight Howard in the 2nd round of a 10 person league, and he is bananas. This is an awesome top ten list, you should post this to my buddy's site http://www.toptentopten.com/ and you can link back to your site. You can also let other people vote on the rankings if you want.