Top Ten reasons why the Illini are flying high

Okay, so this year’s Illini team is probably still one or two years away from being a top team nationally again. And when you consider the fact that Illinois won the second most games in the nation from 2001-2005, trailing only Duke, this year’s fast start hardly has people forgetting the trio of Dee, Deron and Luther and the amazing ‘05 team.

Still, reflect on where Illinois was at this point last year; on their way to a 16-19 season and 10th place finish in the Big Ten with some people even calling for Bruce Weber’s exit because of his in-state recruiting failures. At the beginning of this season, most people pegged them to finish in the middle of the Big Ten, and an NCAA tournament bid seemed very unlikely.

Now, off to a 17-3 start and ranked for the first time since 2006, Illinois has been arguably the biggest surprise in the country. Here are 10 reasons for their surprise turnaround.

10. Senior leadership Illinois’ seniors seem determined to go out on a high note and get rid of the bad taste in their mouths from last season. Chester Frazier has provided great defense and steady ball handling, Trent Meacham outside shooting, and Calvin Brock energy off the bench. Those three seniors have also provided great leadership for a team that starts three sophomores, and has another sophomore and junior college transfer seeing significant playing time. Last week I heard Jay Bilas say that Illinois has assisted on 72% of their field goals, an amazing stat. Four guys average between 11 and 12.5 points per game, and seven different players have led the Illini in scoring. Without a go-to scorer, Illinois has needed to share the ball and keep all five guys involved in the offense.

8. Bench If Kentucky transfer Alex Legion can start to hit his shots more consistently, he turns a good Illinois bench into a great one. Brock isn’t really a scorer, but he is the team’s best athlete and can do a little bit of everything on the court. Dominique Keller, a junior college transfer, has shown signs of late and could start at small forward next season. This is probably the deepest team Weber has had at Illinois, deeper than even the ‘05 team whose only real reliable sub was Jack Ingram.

7. Soft non-conference schedule The only likely tournament team that Illinois played in the non-conference portion of their schedule was Clemson. Their best wins out of conference came against Missouri, Tulsa, and Vanderbilt, all very average teams. Still, last season Illinois lost non-conference games to Tennessee State and Miami of Ohio, so give them credit for not overlooking anyone this time around.

6. The maturity of Demetri McCamey 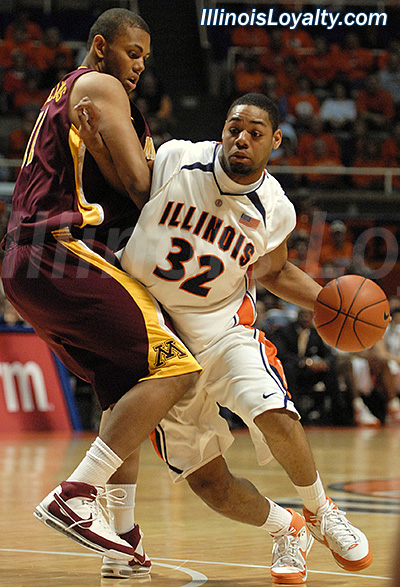 He and Weber haven’t always seen eye to eye, but McCamey is the key going down the stretch. Of late, outside of the Michigan State game, McCamey has stepped up his game and become a more complete player. It’s hard to believe this guy wasn’t more heavily recruited coming out of St. Joe’s (high school teammate Evan Turner probably had something to do with that). At this point, McCamey is even with or maybe even ahead of where Deron Williams was when he was a sophomore at Illinois.

5. Bruce Weber Say what you want about his recruiting struggles the past few years (although that is finally starting to change), but the guy can flat out coach. In a conference filled with some of the best coaches in the country, Weber has done a remarkable job of getting a pretty young team to buy in to his system. He has always been one of the better in-game coaches around, and his teams respect and play hard for him, this year’s group especially. 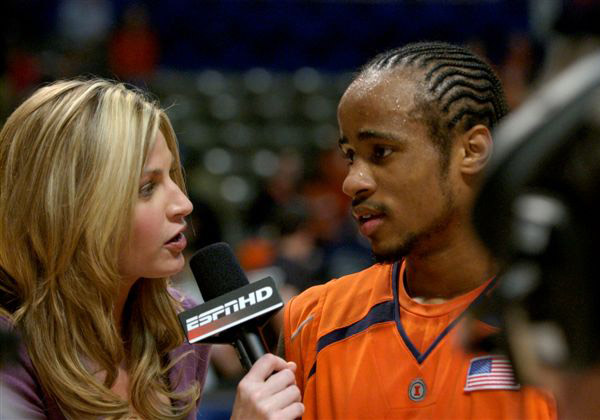 Illinois doesn’t have that take over the game type scorer, so great defense has been what has carried them so far, holding opponents to just 56 points a game, best in the conference. Frazier is one of the best on-ball defenders in the country. The credit goes to the players’ commitment on the defensive end and Weber’s persistence.

3. Development of the two Mike’s With Shaun Pruitt and Brian Randle last season, neither Mike Tisdale nor Mike Davis got much of a chance to play. They combined to average just six points and four rebounds as freshmen. This season, the two have used their size and athleticism to combine for 22 points and 12 rebounds a night. Considering both are still pretty raw, it’s scary to think how good each could be once they get a little stronger and get more experience.

2. Recruiting The sophomore class of Tisdale, Davis and McCamey has been the first of what looks like will be a string of real good recruiting classes. Next year, Brandon Paul and D.J. Richardson highlight a strong class, while the 2010 class looks loaded with star potential in Jereme Richmond and Crandall Head. Even the state’s top sophomore, Mt. Carmel’s Tracy Adams, has already committed to Illinois for 2011. Hopefully, the days of Weber missing out on the state’s top players like Derrick Rose, Julian Wright, Jon Scheyer, and Sherron Collins are gone.

1. Better chemistry Several players already have mentioned how last year everyone played for themselves and how this year everyone’s focus is solely on winning games. You can blame Pruitt and his running feud with Weber for a lot of the turmoil that surrounded the team last season. Watching Illinois this year, it’s obvious these guys are much more coachable and have fun playing together. Good chemistry is often a direct result of winning.
Posted by Ricky O'Donnell at 12:00 AM

Like the list, but what's with the picture for number 7? (although that team was really fun to watch)

I like the list, and could make an argument that this team is more fun to watch that the 05 team based only behind the fact that the best is yet to come. Unlike the 2005 squad, the majority is going to be back in 2009-10.

Good post. It's nice to see something for us Illinois fans and the reasons are right on!

I would argue that Missouri is better than average. They pretty much had their worst game of the year against the Illini

Lets not forget Joe Bertrand for the 2010 class who some that have watched him say, might turn out to be the best in the class. Keep an eye on him after his freshman year! Seriously.