Top Ten odds on what Milton Bradley will do in 2009

The Cubs have signed Milton Bradley to a reported 3-year 30MM deal with some bonus possibilities. The Cubs believe he is the left-handed (technically switch hitter, I know) bat that will solve their playoff offensive woes. I, however, couldn’t disagree more. The Cubs said they were seeking a lefty power bat and, well, Bradley is not that. Bradley is the switch hitting version of Mark DeRosa, which is not bad, but it is not the kind of bat that will draw fear into the hearts of opposing pitchers. In my humble opinion, the Cubs should have gone after Adam Dunn because he is younger, has similar OBP numbers, stays healthy, has a TON more power and has higher production levels. Actually looking at it, like most deep count hitters, both strikeout a ton. The only real difference is the batting average, but personally I will take a 40 HR, 100 RBI (I know, I know) over a guy that hits .300, with decent power and can’t stay healthy. Anyway, here are the ten things that Bradley probably will do in 2009… with odds!!! 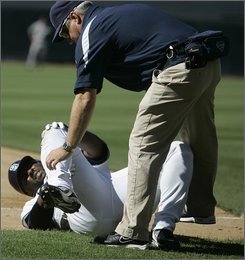 Bradley is probably best known for tearing his ACL while arguing a call in 2007 as a Padre. However, this isn’t the first time he has been hurt in his nine-year career and probably not the last. Last year a brittle back led to him only playing in 126 games, mostly in the DH role. The most games he has ever played in a season was 141 in 2004. I guess I just don’t see him playing right field everyday and something bad NOT happening.

Bradley has hit over 20 HR only once in his career. Much of that has to do with his inability to stay healthy, but prior to last season, when he hit 22, his highest season total was 19 in 2004. I also suspect this will go down from last year simply because he is leaving the home run happy Rangers Park in Arlington.

I feel like he is just due for this kind of transgression.

7/1: Bradley comes to fisticuffs with Z

This just seems like it is destined to happen as well.

As I have mentioned before, Kane is the hardest partier in Chicago right now. My brother and I have seen him out on a few occasions absolutely hammered with a different girl on his arm each time. Bradley must make a name for himself and will do it by taking on the 20-year-old in an all night drinkfest, eventually topping the hockey player and taking the top spot in the Chicago party scene.

Prior to 2007, Bradley hit .300 or better only once. However, the last two seasons Bradley has reached .300 and even surpassed it by 21 points last year. Hopefully, this trend will stay.

I feel this is more obtainable for the injury prone switch hitter. Like I said before, Bradley is not a power hitter by anyone’s definition and moving from a park with a short right field wall to one with a large bell, should make 15+ HR a good season for Bradley.

Bradley supporters will point to his high OBP and for the past few seasons they would be right. The former second round pick’s game took off when he became more patient at the plate and it should remain around .400 as a Cub.

2/1: Lou verbally attacks Bradley; Bradley does not take it well

Bradley will definitely do something stupid or disrespectful and it will inevitably lead to a verbal altercation with Lou. Over and over again, Bradley has shown his ego to be bigger than the team and will most likely respond poorly. I predict an overturned table and thrown lunch spread will somehow be involved in this feud.

1/1: Is suspended for at least five games

As a well-known hothead and borderline retard, Bradley will do something to piss off someone. I can’t see him going through his first season in a major city without something going horribly wrong. If he doesn’t get some kind of suspension I, Zach Martin, will step down as Tuesday host here at TTCS. That is a promise.

Edit note: This is my last weekly post here at TTCS. The very talented Danny Sheridan will be taking my weekly Tuesday spot and I will be trying to post as often as I can from here on out. It truly has been wonderful time reading your comments that disagree with me or point out my minor mistakes in my posts. Thanks for everything.

about as good a trade as DeRosa for the three scrubs; martin for sheridan.

Once again, thank you for your kind words.