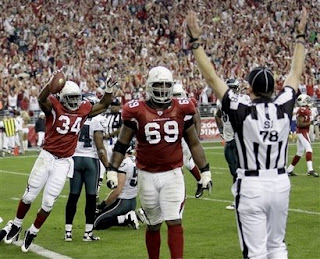 Mike Gandy is about as 'Chicago' as you can get: grew up in upstate Rockford, attended Notre Dame, drafted by the Bears - sucked -, went on to find success with another team. Few would have guessed it a couple years ago, but now Gandy is starting the Super Bowl, protecting Kurt Warner's blindside. Since the Cards make their living through the air, you can argue that Gandy will be as important as anyone on Sunday.

As for his Bears days, here's what Gandy told the Sun-Times' Mike Mulligan today:

''It's tough when you have so many holes,'' Gandy said of his 3½ years with the Bears that included only one winning season. ''We had a ton of holes going into every season, especially on the line. You can't jell on an offensive line unless everybody is playing together. We used a lot of different guys. We had trouble at the quarterback spot. A lot of things didn't work out. It's not good for a left tackle when you are changing quarterbacks every year.'' 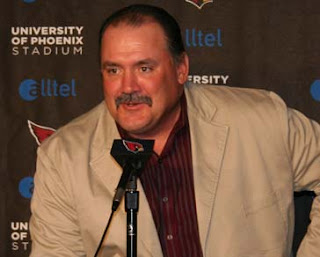 Though he's still a lowly offensive line coach for the Cardinals, some may remember that Grimm nearly became the head coach of the Bears in 2005. After axing the perenially mediocre Dick Jauron, the Bears coaching search narrowed to two candidates: Grimm, and current coach Lovie Smith. 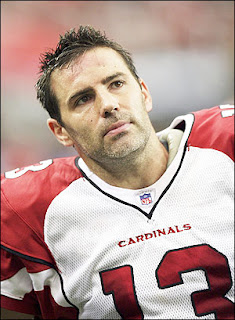 No, Warner has never played for the Bears, nor is he from the area. But doesn't it seem like every time the dude is a free agent, the Bears are rumored to be going after him? Even still.

And for the record, I don't really want any part of Warner this offseason. Three reasons: a) he's 37, b) after leading the Cards to the Super Bowl, he'll command of a truckload of money, and - most importantly - c) playing QB is just a tad easier when you're throwing jump balls to Larry Fitzgerald rather than Rashied Davis. 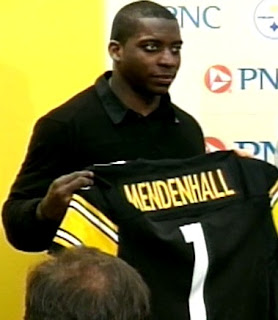 I used to, and I suppose still do, fancy myself as a bit of a draft nerd. Roughly fourteen months ago, I really only wanted my beloved Bears to draft one guy: Rashard Mendenhall. The Bears (rightfully) passed on Shard in the first round to grab the far superior Matt Forte in the second, and the former Niles West and U of I star slid until he was picked by Pittsburgh at No. 23.

Mendenhall was put in a tough situation from the start, having to backup star tailback Willie Parker, but didn't do himself any favors with a lengthy training camp contract holdout. A shoulder injury eventually KO'd his season, but I'm not ready to him a bust just yet. 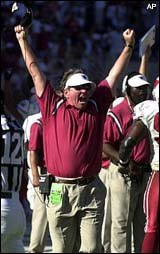 Ah, Dave McGinnis. Remember him? If not, maybe Wikipedia can help:


McGinnis was the focal figure in an embarrassing public relations blunder by the Chicago Bears in 1999. After McGinnis interviewed for the vacant head coach position on Thursday, January 22nd, team president Mike McCaskey prematurely organized a news conference for the following day with local and national media to announce the hiring of McGinnis as the 11th Head Coach of the Chicago Bears. The news came as a surprise to most notably Dave McGinnis, who had not reached terms on a contract. In an attempt to save face, the Chicago Bears postponed the news conference and issued a personal apology to McGinnis from the patriarch of Bears ownership, Ed McCaskey. However, Dave McGinnis remained disenfranchised with the order of business conducted by the Chicago Bears organization and officially declined future consideration.


The Bears went on to hire Dick Jauron, while McGinnis became head coach of the Cardinals. 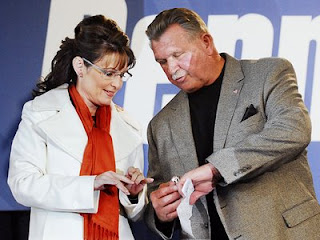 It has long been my opinion that Da Coach's name should be spelled only in all caps. I don't know, it just seems fitting. Has their ever been a more beloved man in our city's history? What's even scarier is that had Ditka decided to take the Republican nomination in the 04 senate race, there's a small chance Barack Obama might not be our president right now. MIKE DITKA says "keep the change".

Oh yeah: Ditka grew up in Western PA. Count it. 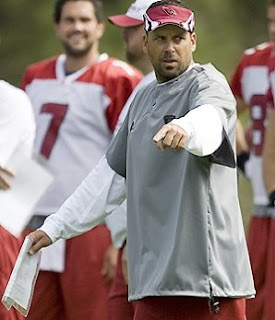 The Cards' offensive coordinator was thrust into the spotlight this postseason after a highly publicized on-field battle with star receiver Anquan Boldin. What people may not remember is that Haley was the Bears' wide receivers coach just a couple years back. Now he's arguably the hottest assistant coach in the NFL.

The Bears: ruining great offensive minds for at least the last 21 years.

Until this unlikely run to the Super Bowl, what is the one thing most people remember about the Cardinals this decade? Come on, this one's too easy... (a little bit of NSFW language here)

2. The winner of this game will be the first pro team to meet President Obama 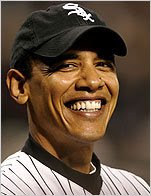 I think the headline pretty much speaks for itself.

Also: there is obviously no way this is ever ever ever ever ever going to happen, but, hypothetically, let us just assume the Cubs win the World Series in the next four to eight years. This will naturally be followed by pigs flying and hell freezing over, but work with me here for a second. Would the prez act hostile towards the North Siders? Refuse the meeting, even? Would he wear his signature beat up Sox cap to the photo op? So many questions. Too bad we'll never get any answers.

Not only were the Cardinals once Chicago's, but while the Bears were slumming it at Wrigley, the Cards were playing in gorgeous Comisky Park. If that's not enough reason to root for them on Sunday - assuming you can overcome the Ditka connection.....DITKA - I don't know what is.
Posted by Ricky O'Donnell at 1:33 AM

Haha I can't get enough of your school story. Those who are curious as to what I am talking about, go to tremendousupsidepotential.com. One of the funniest things I have ever read.