Top ten Bears that need not return in 2009 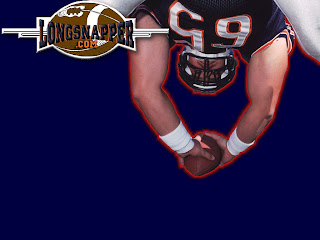 Ha, just kidding. Who doesn't love the proprietor of the Web's best long snapping site? Do you think P-Man designed that snazzy intro himself? 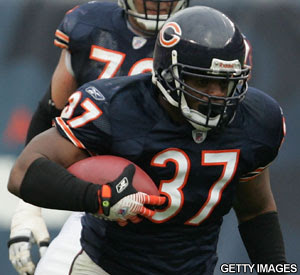 Is it possible that McKie is kind of like Milton from Office Space? There is no reason the Bears should actually have been paying him the last five years. Must be some kind of glitch in the system. For their next fullback, I suggest Jerry Angelo targets a guy with a more thorough Wikipedia page. 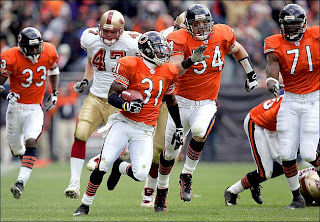 Maybe it's not all Nate Dogg's fault he can't stay on the field. When he plays, he's pretty good. But the Bears need some cap space to find help on offense, and Vasher hasn't earned the five year, $28 million extension he signed a couple years ago. That's the kind of thing that happens when you miss 19 games the last two seasons. 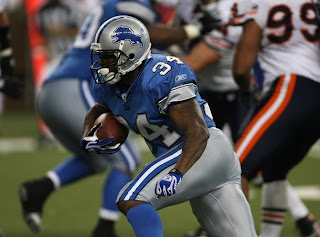 Sort of like how the Sox should just stay away from any Royals relievers, I think it'd be a good idea if the Bears to steer clear of anyone drafted by Matt Millen. 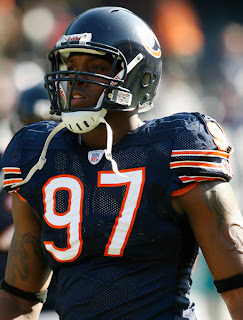 Since Week Five of 2007, Anderson has just two sacks. And to think, this guy was handed a starting spot over the great Alex Brown. 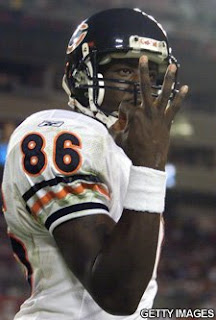 As long as Jerry Angelo is bringing back receivers from my youth, why not give Marcus Robinson another go around? I guarantee he'd fare better than Booker did this year, and, who knows, at this point he might finally be healthy. Or not. Either way he's way cooler than f'n Marty Booker. 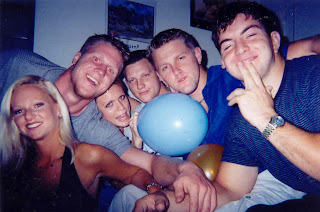 We know this much: even though he no longer plays, Rex is still the suckiest suck that ever sucked. Whatever the opposite of intangibles is, that's what Grossman brings to the Bears every day, in meetings, practices, and on game days. He's like the anti-Derek Jeter (though only slightly worse defensively). Just getting rid of Rex will be like a huge weight lifted off everyone's shoulders. Plus, I kind of like the fact that his replacement waiting in the wings, Caleb Hanie, seems to be the complete ethical opposite of Grossman and Orton. Less throwgasms, more Hail Mary's. 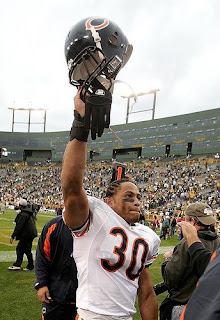 I appreciate what Brown has done in Chicago as much as anyone, but, really, he should have been sent packing three years ago. Lost in all the injury hubbub is the fact that Brown's play clearly declined this year as well. I'm not sure if Craig Steltz is the answer, but I know Brown isn't. Would anyone else like a little Taylor Mays in their life next season? Phil, I'm looking at you. 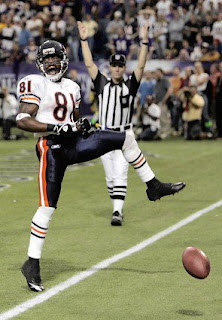 Rashied Davis couldn't catch a cold, which is rather unfortunate because if he only had the flu, I doubt Lovie Smith would continue to put him on the field, which, in turn, would mean less dropped passes for Kyle Orton. It's science. 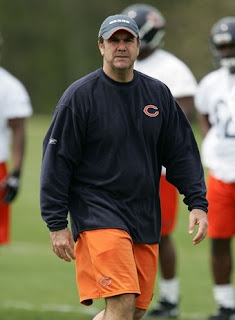 "Since Week Five of 2007, Anderson has just two sacks. And to think, this guy was handed a starting spot over
the great Alex Brown"

Remind me, how many sacks has Brian Urlacher had since Week One of 2007? That's right, one.

"Rex is still the suckiest suck that ever sucked."

O.K. I gotta give you props for this one.

I went back and forth before ultimately deciding not to put Urlacher on this list. He's obviously not the player he once was anymore, and I'm not even sure that he's good. It would be karmic justice to cut him after he under performed his contract, especially after last offseason's holdout which happened before he felt he out performed it.

A move to strong side, maybe? Urlacher blows now, and he certainly doesn't do himself any favors in the PR department, but I still kinda don't think they should cut him.

We should keep Mike Brown. His presence in the defensive backfield was missed in XLI, all of last year, and the wide open touchdown throw to Andre Johnson last week. He hits hard, he plays smart, and he is an emotional leader for that defense. I agree with getting rid of Ba-bitch though. He is the suckier suck that ever sucked.

Brian Urlacher and Anderson/Brown play two different positions. The defense has always played better when they don't send Urlacher on a blitz. Does he suck, yes. But to argue that he sucks because he doesn't have any sacks is an incorrect way to go about stating why he sucks.
Mike Brown needs to go. And I will be very surprised if they keep him. While that Andre Johnson TD was ugly last week, even with Brown there, AJ out-runs him, then out-jumps him, stiff-arms him. The "he hits hard" tag is very misleading because he is so slow that he will always be late on the ball and instead of being able to bat the ball away, he will have no choice but hit the guy. There are probably 20 safeties who hit harder than he does, but we won't see them have to unload on a guy because they make a play before he gets it.

How about trading Urlacher before he becomes completely useless. We spent the season watching him getting moved out of the way on runs up the middle and running up to piles after tackles have been made. Can we trade him for a top notch receiver, like Antoine Bouldin?

Actually Urlacher had 5 sacks last year. Urlacher is still a quality middle linebacker. The reason for the fan disappointment in his play, are extremely high expectations, caused by an overinflated contract, based on false illusions of a superhuman defender. All he is is a big strong quick linebacker with a nose for the ball and a competitive nature.