With the NFL Combine wrapping up later today, we will now have to suffer through two months of mock drafts and Mel Kiper Jr., never a good combination. The NFL Combine and NFL Draft are just two of the many sporting events that are overrated and overhyped when you consider all the coverage that goes into them. Here are the 10 most overhyped sporting events.

10. MLB opening day If Albert Pujols goes 0-for-4 on opening day with four strikeouts, here might be some of the reaction: “What’s wrong with Pujols? Why did I draft him first in my fantasy league again?” If the Orioles beat the Yankees on opening day and rough up CC Sabathia: “The Yankees spend all that money, and they are still the third best team in that division.” If Jerry Owens goes 4-for-5 and steals a couple bases: “Looks like the Sox have found their center fielder of the future.”

9. Super Bowl The expectations for the Super Bowl are exceedingly high, considering it’s the championship game for the most exciting professional sport. While we’ve been treated to two great games in a row, did the majority of people who weren’t Giants, Patriots, Steelers, or Cardinals fans honestly care about the outcomes? For two weeks, we are forced to listen to the same overanalysis and over-done feature stories. Leading up to this year’s game, how many different times did we hear about how great Larry Fitzgerald and Troy Polamalu are?

8. Winter Olympics You can get a gold medal for events so goofy that they could have been dreamed up by a bunch of bored third-graders trying to kill time on a snow day. The Winter Olympics are basically a celebration of unknown amateur athletes competing in frostbite conditions in events that no one really understands (with the exception of ice hockey). 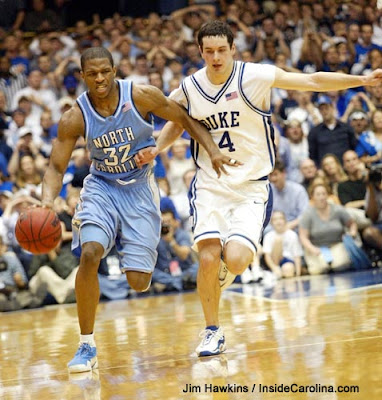 When you combine the annoying presence of Dick Vitale and the fact they play two or sometimes three times a year, this rivalry isn’t nearly as good as ESPN makes it out to be. Maybe part of me is just sick of seeing Duke make Tyler Hansbrough look like God’s gift to basketball these last four years. There might not be two more overrated coaches in college basketball than Mike Krzyzewski and Roy Williams.

6. NFL Draft Let’s face it, you can do all the scouting in the world, but the NFL Draft is a crapshoot. No one can predict the success of a player, no matter how good he was in college, how good he looks on film, or how well he tested at the NFL Combine. Just once I’d like Mel Kiper Jr. to actually go out on a limb and risk his reputation by saying something like, “I guarantee this guy will be a major bust.” Finally, outside of when your favorite team is picking, does anyone really watch or care?

Before the BCS, the Rose, Sugar, Orange, and Fiesta Bowls all meant something. Now, these four bowls only serve three real purposes; make money, give a couple of the winning teams rallying cries as to why they should have played for the national championship, and help determine next year’s preseason rankings. Also, how did we get to the point where teams like Louisville, Wake Forest, Cincinnati, Kansas, and Hawaii get to play in these “marquee” games?

4. NFL Combine Wonderlic tests, 40-yard dashes, bench presses, vertical jumps, physical measurements; jeez my head hurts. What’s worse is that every NFL team sends their GM, coaches, and entire scouting departments. Even worse is that the difference between a half a second in your 40-yard dash time could earn or lose you a few million dollars. The worst part though is that the NFL Network covers the weeklong showcase live.

Thank you, ESPN. The teams are going to play each other some 18 times during the regular season, so to attach any importance to a three-game series in May is beyond stupid. It was pretty cool though seeing Don Zimmer get knocked to the ground after charging Pedro Martinez in the 2003 ALCS.

2. National signing day If recruiting analysts really knew everything, shouldn’t Notre Dame have had a lot better than a combined 10-15 record these last two seasons? While the most dedicated evaluators do their best to see as many athletes as they can in person, much of it is still word of mouth and a few looks at some old video. In reality, the rating system is a very subjective educated guess. Besides, there are never really any surprises. The Ohio State’s, LSU’S, Oklahoma’s, USC’s, etc are always going to be right at the top. And, please, can we eliminate the press conferences where the player keeps everyone in suspense before finally putting on his school’s hat while his family cheers in the background?

1. Heisman Trophy The amount of ink and air time wasted on this is mind-boggling. More often than not, the best player doesn’t win, and the winner often fails to find success at the pro level. And while we’re at it, why don’t we just call it what it is: the award given to the best quarterback or running back from a powerhouse program.
Posted by Ricky O'Donnell at 12:30 AM

We can single-handedly blame ESPN for at least four of these events... That is why I can't watch Sportscenter any more than twice a week. While I just admitted that I don't watch it as much anymore, I will say that the SC hype for both the UNC-Duke/Yanks-Red Sox has decreased a little in the past few years. There was that time in 2006 when ESPN had UNC-Duke on ESPN, ESPN2 and debuted ESPN 360 with them... all with different camera angles.

Great post man. I don't neccessarrily agree with all 10, but I like the idea. Here were a few more I thought of: NBA slam dunk contest, Pro Bowl, any Nascar race.

I agree with Phil Barnes Re: Sportscenter. I quit watching it about 4 or 5 few years ago because it was (is) all about hype & shtick. SC is like reality TV in that it cherry picks flashy plays from games -- not necessarily even important plays, just telegenic plays like 3 pointers, dunks, etc. -- and builds a "narrative" around the selected plays (often out of sequence). Sports Center dumbs sports down IMO.

To be clear, I'm not hating on the media for hyping sporting events. After all, they've got to do what they can to get ratings. With ever-increasing competition for the public's attention (in terms of entertainment outlets), and with TV ratings going down across the board, TV networks are locked in a battle for viewers.

So every big college football game becomes the "game of the century." Every Yankees/Red, or Duke/North Carolina game becomes "one for the ages," etc.

I understand why they hype everything up. But it gets old fast.

While I disagee with the North Carolina and Duke point, most others fall right into place. What would be some events that fall into the Top 10 Category, this way I can understand your basis of judgement.

Agree totally about the Super Bowl for sure. Unless you either are are a fan of one of the two teams, or have big money on the game, who cares? If anything, I would have put the Super Bowl and NFL Draft numbers 1 and 2 on this list.
Disagree on Duke-Carolina though, bc having been to one of those games at Cameron a few years back, there's nothing quite like it.
Great pictures for # 3 and #6 by the way.

Here are some others that deserve consideration: any professional all-star game, major conference postseason tournaments in college basketball, any golf event without Tiger Woods, heavyweight boxing-weigh-ins.

Kentucky Derby. Hitting a horse to make it run doesn't make you an athlete, Pedro/Hector/Juan.

How about any soccer that isn't the World Cup?

I completely disagree with the last two... The Kentucky Derby is actually entertaining and only takes up two minutes of your life a year. Not to mention we weren't arguing what was a sport and what wasn't.

I disagree with the soccer argument for a few reasons.

Also many soccer fans (myself included) would argue that soccer at the club level is significantly better than at the international stage. So if The Euro was the only competition we saw on tv, that would make a little more sense.

Dave's list of events was good and I agree with all of them but the post-season college bball tournaments.