After Kobe Bryant scored 61 versus the Knicks on Monday night, the discussion began that maybe he was a better player than Jordan. Then two nights later at Madison Square Garden, LeBron James came in and dropped 52 points to go along with 11 assists and 10 rebounds, and the talk got even louder that MJ wasn’t at the level of these current superstars. Problem is, all these talkers lack a long-term memory. Here are ten reasons that Air Jordan was better than both Kobe and the King.

(Note: This isn’t saying James (age 24) or Bryant (30) will never be better than MJ, just that right now they aren’t at that level.)


10: Jordan made every battle a personal one


One of Jordan’s best attributes was that he always found a way to tell himself he was being disrespected. Isaiah Thomas wouldn’t pass him the ball during the ’85 All-Star Game, so MJ made it his life mission to torment the Pistons guard, going as far as to forcing USA Basketball to leave Thomas off the Dream Team if they wanted MJ to play. Yet time after time Shaq has called out Kobe in public, and the Lakers star has never responded with a huge game versus O’Neal’s team. Michael never would have stood for that.


During MJ’s career, teams were allowed to hand check offensive players and play the Bad Boys/ Pat Riley kinds of physical defense. Now, if LeBron is touched anywhere inside the three-point arc, he goes to the free throw line. Yet Jordan still averaged more than 30 points a game over the course of his career in the regular season and over 33 in the playoffs.


8: Jordan was in Space Jam

Are you telling me that LeBron James and four cartoon characters would be able to beat a MonStar lineup of Shawn Bradley, Patrick Ewing, Charles Barkley, Larry Johnson and Muggsy Bogues? I doubt it. 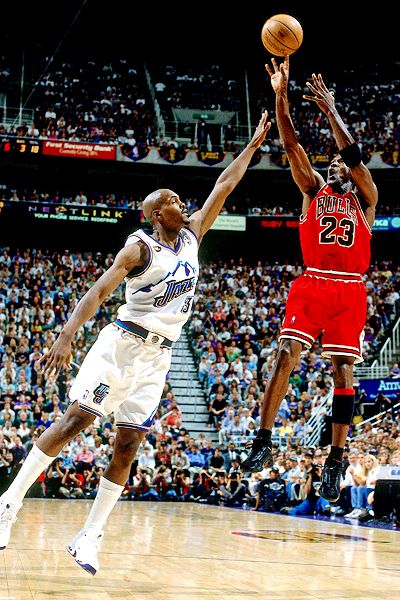 Starting off, Michael was a drive to the basket player who had solid- but not spectacular- range on his jump shot. As he matured as a player and some of his athleticism vanished, he added a pull up jumper, some post moves, and most famously, a completely un-guardable fadeaway. Both Kobe and LeBron are young enough that they can get by on their raw skills, as well as improving every season themselves. It still remains to be seen though when those two lose some of their athletic skills if they will be able to adjust like Jordan did.

No offense to Scottie Pippen (one of the top five players of the 1990’s), Dennis Rodman (best rebounder ever) and Jud Buechler (the whitest player ever), but Michael was never surrounded by the greatest talent, especially in the frontcourt. On the other hand, Kobe spent the first half of his career alongside the leagues most dominant player, Shaq, and has also played with fellow All-Stars Gary Payton, Karl Malone and Pau Gasol. LeBron, you get a break on this one. 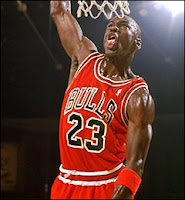 When Mike came into the league, there was nobody for him to model his game after. He was the first dynamic shooting guard who could dominate by attacking the basket since Elgin Baylor, who had been retired for 13 years when MJ joined the Bulls. Kobe and LeBron on the other hand had the pleasure of watching and studying Jordan, a reason MJ’s influence is alive in both players’ games today.


4: Jordan came first (off the court) 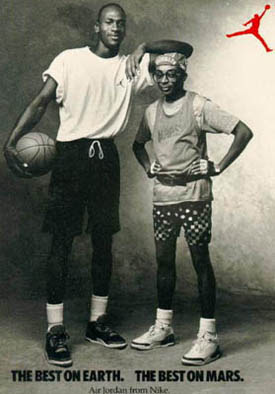 Would Kobe have his own line of Nike sneakers without Jordan coming first? Who knows. Would LeBron have jersey number 23 if MJ hadn’t done it before him? Can’t say. Would either player be wearing baggy shorts were it not for Michael making that a must in the NBA? Beats me. The point is, Jordan made as much of an impact off the court as anybody before or after him in basketball history.


What was the biggest shot of Jordan’s career? The debate could last for hours, with arguments to be made for his three-pointer to win the Flu Game in ’97, ‘The Shot’ over Craig Ehlo that took out Cleveland in ’89, his baseline jumper for North Carolina in the ’82 NCAA Final or his steal, crossover and jump shot in ’98 that gave the Bulls championship number six. And that’s just the four most memorable plays. Kobe is a great end-of-game player and LeBron is getting there, but neither is on MJ’s level when the clock is ticking down.

Both James and Bryant are great defenders, often times locking down their opponents’ best player. But they never got into players heads on the defensive end like Mike did. Does anybody realize that Jordan is #2 all-time in NBA history with 2,514 steals in 15 seasons? Bryant, in his 12th year in the league, has a little over half that many (1,380).

Michael was the best player on six NBA championship teams. So far, Kobe has been the second best player for three titles and most recently lost by 39 points in the deciding game of the ’08 Finals. LeBron almost single-handedly got Cleveland to the ‘07 Finals, where his team was swept. Until either the Lakers or Cavaliers begin taking annual champagne showers in mid-June like Jordan did, the original #23 will still be the best.
Posted by Eli Kaberon at 12:42 AM

Top notch list my friend, no way Bron Bron could handle the ferocity of the Monstars.

I think #6 sums it all up. Jordan made his teammates better.

"and the talk got even louder that MJ wasn’t at the level of these current superstars."
What??? I haven't heard any talk this week that because of one huge game by both Kobe and LeBron against a pathetic Knicks team that they are suddenly each better than Jordan. That line you wrote makes absolutely zero sense.

I disagree with the last comment, I saw a few articles and polls after the two games at MSG earlier this week about how LBJ and Kobe had more impressive performances and how their games were better than Jordan's.

JORDAN NEVER LOST IN THE FINALS. KOBE DID.

I think the ever declining interest in the NBA is testament to the fact that neither Kobe nor LeBron are fit to hold Jordan's jock.
Not only was Jordan the best to play the game, he was an ambassador for the NBA and basketball in general. I would wager that he created more new fans of the game than Bryant and LeBron combined.

I had the pleasure of going to several Chicago Bulls game to photograph Michael Jordan during the dynasty years. The guy was simply amazing. Kobe can only dream of being better than Jordan.

No one can stand up to jordan. they are talking so much this week about whose game was better at msg jordan kobe or lebron but they arent talking about how jordan scored 55 against the knicks team who went to the semifinals that year just 5 days back from retirement. while the knicks arent even at 500 this year. whose game was better? ha